The Heart Sutra in Pictures 絵で見る般若心経

On a trip to Kyoto earlier this month, I visited a Zen temple called Kodaiji  which boasts lovely gardens and a charming, whimsical tea house  (the Iho-an chashitsu) .  As it happened, the temple was hosting a temporary art exhibit so I went in for a look.  As soon as I stepped in I saw the  colorful contemporary canvas in the photo at left, displayed in a traditional room with tatami mats. Moving in closer, I saw that the image was made up of row upon row of little pictures that seemed to be in some sort of order. It was interesting and attractive, but I had no idea what I was looking at. 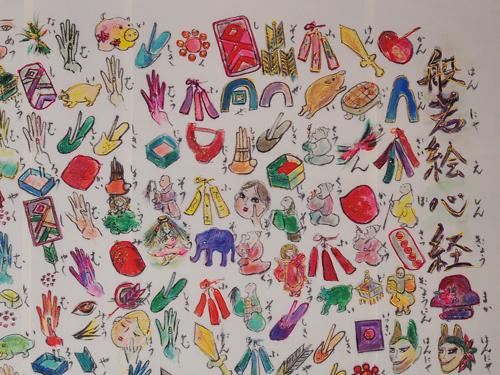 Just as I was about to leave I met the artist,  Sato Misako 佐藤 美佐子, who kindly sat down and enlightened me.  Her painting was the Heart Sutra — one of the most widely known Buddhist texts.  Not a visual interpretation of it, but a cheat-sheet on how to recite the sutra — in pictures!  She explained that her work is a modern update of an older tradition called hannya e shingyo 般若絵心経 - a phonogram system developed in the Tohoku region during the Edo Period to help children and people who couldn’t read learn the Heart Sutra. It was the March 11 earthquake and tsunami in Tohoku that moved Sato to create this painting. 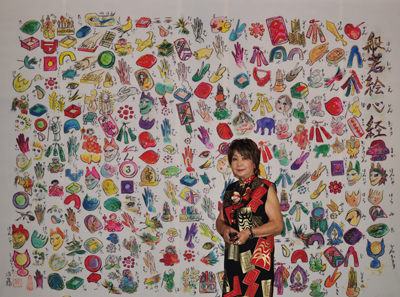 In a book called はじめての『般若心経』 (Hajimete no Hannya Shingyo “Your First Heart Sutra”), I found a handy-dandy decoder for hannya e shingyo:

If you’re interested in the book, you can view or buy it on Amazon Japan by clicking here.

3 Responses to The Heart Sutra in Pictures 絵で見る般若心経